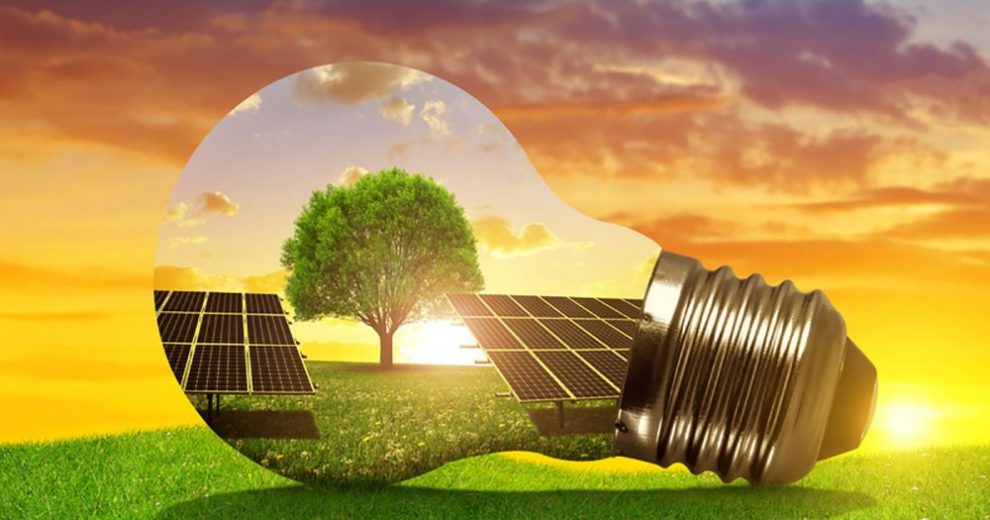 The rapid growth in the US solar industry is helping pave the way for a cleaner, more sustainable energy future. Over the past few years, the cost of a solar energy system has dropped dramatically – giving many American families and businesses access to clean, affordable energy.
Through its portfolio of R&D efforts, the Department of Energy remains committed to leveraging America’s abundant solar resources – promoting solar energy solutions‘ research, production and market to support expanding solar power market of the nation.

Since 2008, hundreds of thousands of solar panels have appeared across the country. More and more Americans choose to power their daily lives with the sun energy. Thanks in part to the investments made by the Solar Energy Technologies Office, the cost of solar energy has decreased every year. You may be considering adding a solar system to your roof or finding another way to harness solar power. While there is no one-size-matched-all solar solution, here are some resources that can help you figure out what’s best for you.

How does solar panel work?

To capture solar energy and transform it into electricity, photovoltaic modules (PV) are used. These solar modules, with bluish reflections, consist, in most cases, of an assembly of photovoltaic cells made of silicon.
Silicon is made from silica (especially in sand), an abundant material on Earth. This silicon must be made very pure which requires a large amount of energy.
Electricity is a movement of electrons. 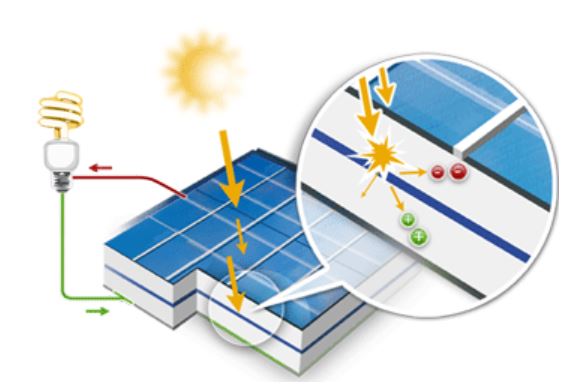 Thus, when light penetrates silicon, it brings energy in the form of photons. The photons will impart their energy to the silicon atoms, leading to the creation of electric charges. The electrons of the phosphorus doped zone will join the holes of the boron doped zone via the external connection. They are then collected by the metal grids. In passing, their displacement creates an electric current. We are talking about photovoltaic energy.

The photovoltaic electricity thus produced can then be injected into the general electricity grid for use elsewhere, or stored in batteries to serve at times when there is no more sun.

Photovoltaic panels are installed mainly on roofs (inclination of 30 to 35 degrees and recommended south orientation) and their fastening systems differ and affect the ease of installation, the necessary accessories, the duration of intervention, the degree of competence and the tools necessary for the installation. From the rails laid over the blanket to the decoiling and then to the installation of a waterproofing system or an under-roof screen, the costs vary considerably. The installation of solar panels allows the production of electricity, their installation is relative to various parameters. The choice of solar panels, according to defined criteria, requires a preliminary study and a precise definition of the needs of the installation and / or housing.

To install solar panels, you must necessarily be comfortable with the work at height, the cover, you know there sealing to prevent water leakage. You will need to ensure the correct fixing of the panels that must withstand harsh weather conditions by installing hooks, rails, trench or even battens.

Reading a manual, knowing how to read a connection diagram, working safely (electrical intervention) installing and connecting an inverter, connecting electrical wires and fixing them to the wall, knowing how to use a drill-driver and a circular saw are also prerequisites. Depending on the solar panels and their method of attachment, you may need to install the under-roof screen or a sealing system (by stapling in the first case and by screwing in the second). Good physical fitness is also needed to work on a roof and handle the voltaic panels. 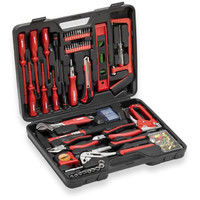 1. Unwrap at the location of the solar panel

There are two distinct cases. If the roof is covered with mechanical tiles or slate, you will have to proceed with a partial removal. Start by delineating the exact location where you want to install the solar panels. The tiles must then be removed on a surface slightly greater than the surface of the panels to be laid. Once this is done, a hole appears in your roof: there will be housing the photovoltaic panels after a meticulous preparation.

Unwrap with protective gloves because the tiles are abrasive and can hurt your hands. Any work on the roof must be carried out with a fall protection system (fall protection net or lanyard with harness). If you are cutting near the ridge, be careful not to break the ridge tiles or the half-pipes (do not walk nearby and lift the tiles carefully). 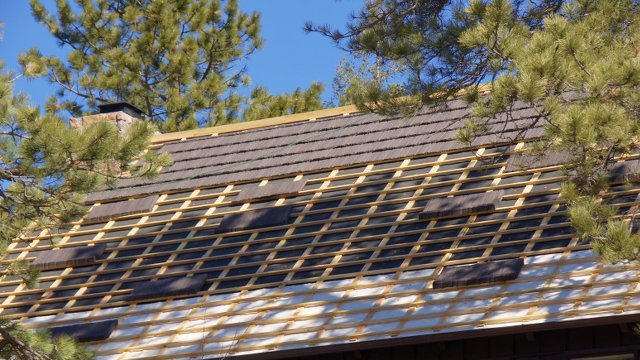 If your roof is not volved (carpentry in small houses), do not walk in the middle of the battens or on the under-roof screen as it may fall.

2. Install the lower and lateral aberrations

The aberrations are pieces of connection between the roofing materials of your roof, in your case tiles or slates, and the various elements that protrude from the roof, here the solar panels and their fixings. They allow to achieve a perfect seal. We find abergements adapted to each model of mechanical tiles, as for the shape as the color. For slates, it is a slate color sheet or a piece of zinc, the old.

The installation of the abergements consists of a fixing with screws on the existing battens or on added battens. The use of a screwdriver is necessary as the meter to postpone the exact measurements. The hooks are also fixed with screws. 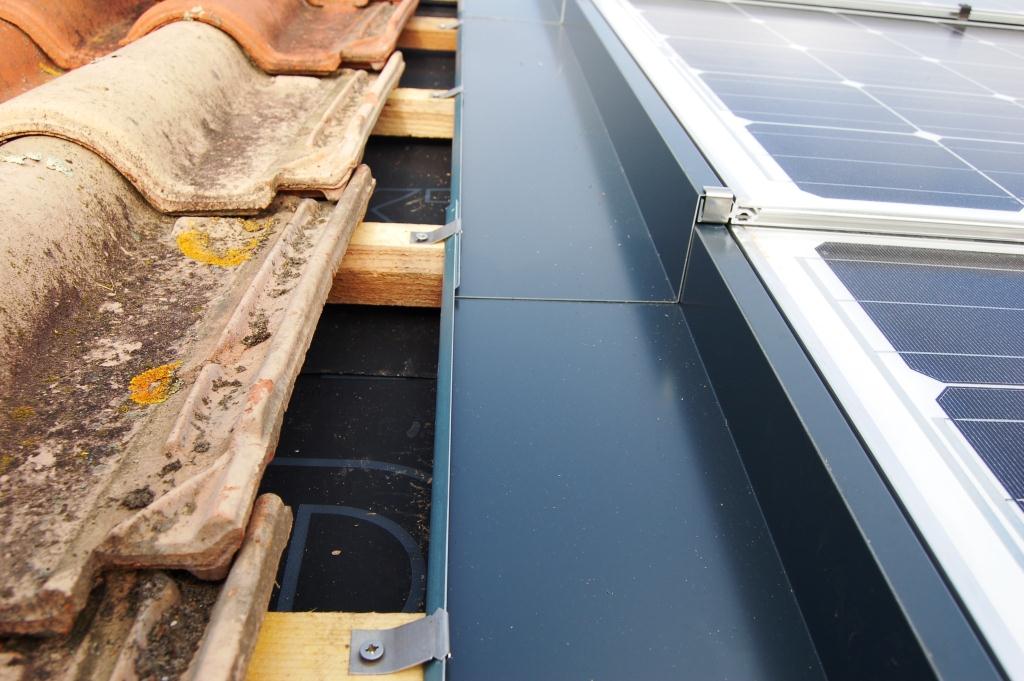 If necessary add a trench along the length of the panel and behind the first row of tiles to gain height and provide a better foundation for the boarding. The abelement can be plastic and delivered with the kit but also be a lead strip that should be unrolled on the previously installed volige and the first row of tiles. The lead tape (variable width) is glued with silicone glue applied with an extruder gun. The lead tape, deformed by hand, follows the shape of the tiles. Planks and battens are cut with circular saws.

Laying of the under-roof screen
When laying a roof, it is necessary to install an under-roof screen. The latter is a plastic technical film whose function is to create a barrier waterproof but not air. It is recommended when installing this under-roof screen to create an air space between this screen and the insulation complex if necessary in order to avoid any risk of mold (the screen is usually installed and stapled on the truss on traditional frames). 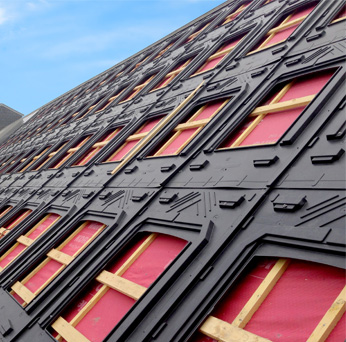 4. Lay the rails and panels

The rails must be securely fastened to the rafters with hooks (use the screwdriver and suitable screws); the solar panels are heavy and offer a great hold in the wind. Complex shapes with possibly some adjustments to fit their shape to certain tiles allow fixing through the cover. Full decontamination is no longer necessary because the rail structure is above the roof.

Note that some solar panels can rotate a quarter of a turn, their large side is found in the vertical. It may then also be necessary to lay the rails vertically. The panels then attach to the rails with hooks or bolts. Once all the panels are in place, you can fix the upper abergeement and then rest the missing tiles or slates.

In the setting of solar panels on a sealing system, the support rails can be directly installed on them. 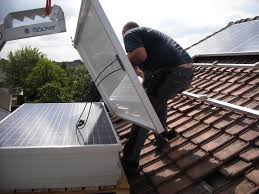 5. Connect the panels to the inverter

The inverter is an electronic device that transforms the unstable direct current output of photovoltaic panels into a 220 V alternating current and a frequency of 50 Hz (frequency found on the network formerly ERDF Enedis). This inverter is itself connected on the one hand to the panels, and on the other hand to the non-consumption meter, which is found at the head of all the individual power generation installations connected to the network. It is imperative for this step to know how to read an electrical diagram. 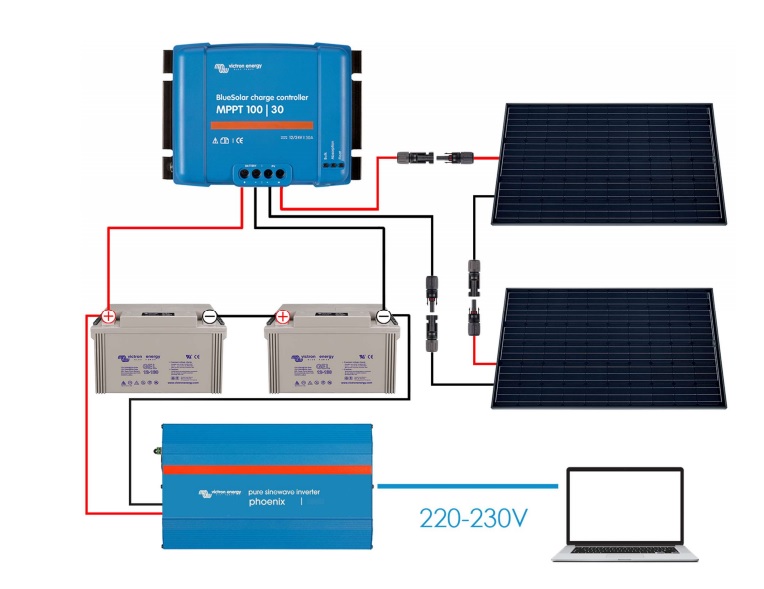 If each panel produces a voltage of 12 V, the two panels in series produce a voltage of 24 V. If you connect the terminals of the same polarity between them, the panels are connected in parallel. This arrangement produces a voltage of 12 V, but the intensity produced is the sum of the intensity produced by each panel. Be careful, if you connect two groups of panels in series in parallel, the voltages of each group must be equal to preserve the panels and maximize their production.