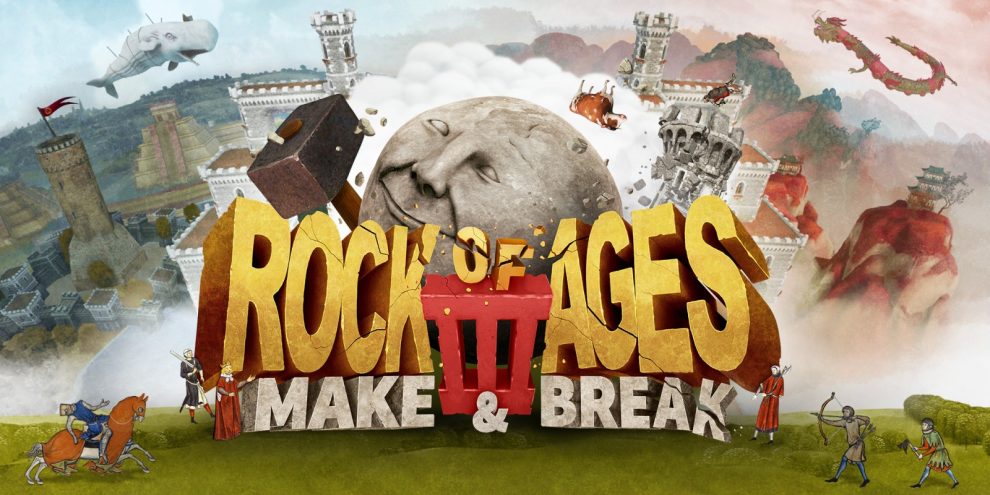 After two first chapters, the Rock of Ages series comes back to us with a more ambitious third part, but also twice as expensive as its ancestors …

A successful series from the Chilean studio ACE, author of the very atypical Zeno Clash, Rock of Ages has enjoyed growing success in recent years. The series changed editor along the way, however, from Atlus to Modus. A change of publisher is accompanied by new ambitions and a sudden increase in prices… It is important to specify it from the outset, this third part is sold twice as expensive as its ancestors – $29.99 instead of $14.99. A price increase that the game struggles to justify, however … 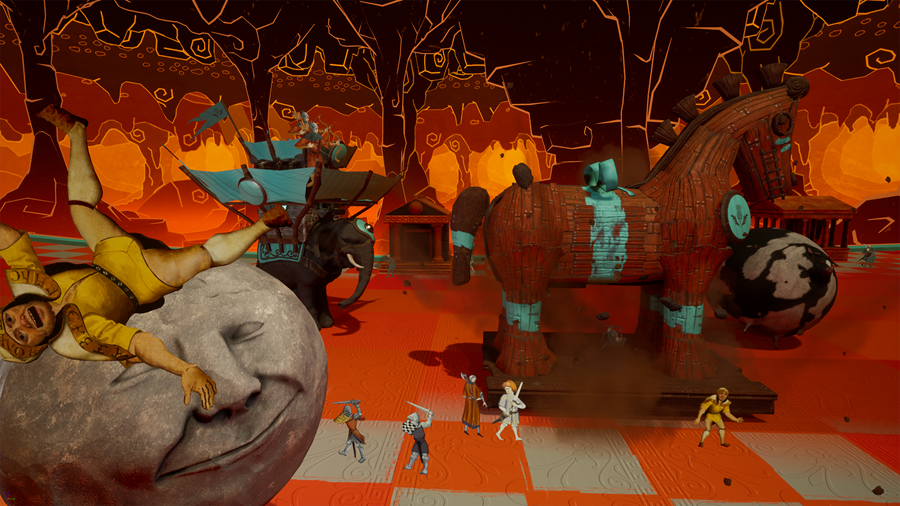 Because in practice, this Rock of Ages 3: Make & Break does not add much that is really new compared to the second part. The basics of the game remain the same. The gameplay evolves very timidly indeed. We, therefore, find ourselves again projected through a quest through the ages in which the player will meet many historical figures. Full of humor, the cinematics of the game remains in the tone of the previous sections and are enjoyed with passion. On the gameplay side, we find this strange mixture of tower defense a little failed and completely blocked boulder game. The concept is simple: protect your fortress by placing a whole series of traps, creatures and ramparts in your opponent’s path while attacking the enemy fortress with his large boulder.

Generally speaking, the gameplay has changed very little. There is one or the other little novelty, but whether it is in its construction or its handling, Rock of Ages 3 is practically the carbon copy of its ancestor. 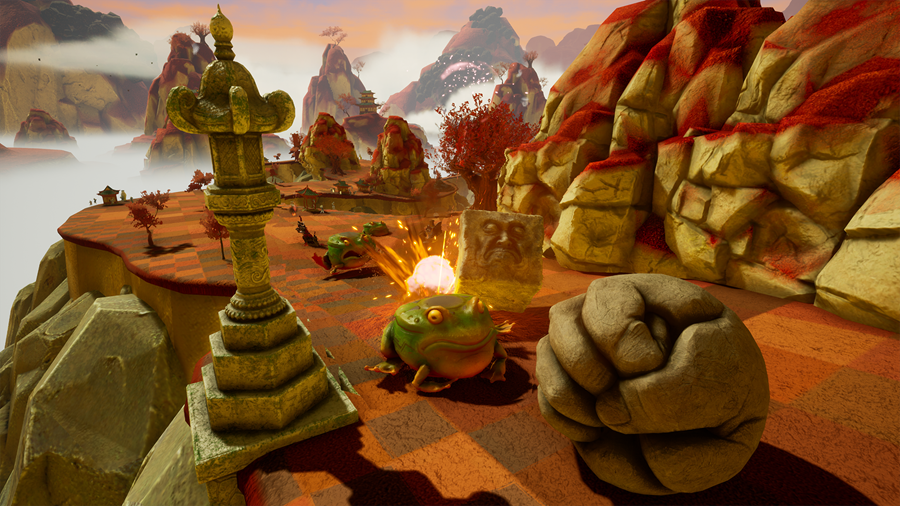 So yeah, we’re having a lot of fun there. The game is quite fun to play (especially with friends), the handling is simple and the mix of genres still works, but all of this is sorely lacking in this little new element that would have breathed new life into the franchise. 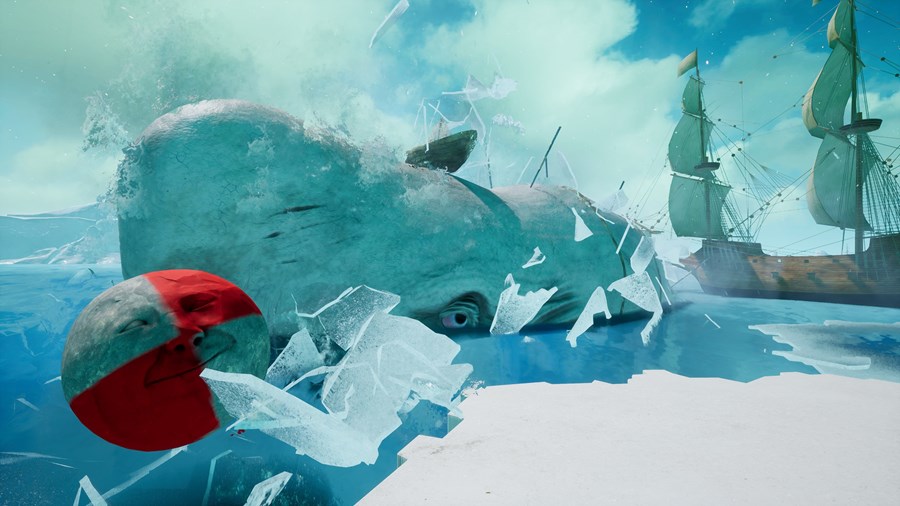 Especially since this sequel inherits the same flaws as its predecessors. The game interface is still not very intuitive, the strategy remains very basic in the construction of defenses, the result more often depending on luck than on your skills, and the grip of the ball (literally) is still just as clumsy.

The Chilean studio is trying to justify the price increase by a very successful realization, with reworked cinematics and a graphics engine that exploits the potential of consoles very well. On the content side too, the game is enriched with a new very complete level editor which will allow the community to feed the game with content for years to come … But you still have to be a fan, because as fun the game can be, Rock of Ages 3 is typically the kind of game that you put away neatly once the single-player mode is over, and that you only occasionally come out with friends.

So yes, this third installment does not have to be ashamed compared to the second, and yes the fans will get a lot for their money with the very generous content of this episode, its level editor and its multi-part, but somewhere, we would have liked the Chilean studio to spend more time refining certain game mechanics rather than just playing the content card. Especially since for those who will be content with the single-player mode, this third installment ultimately brings nothing really transcendent apart from the new levels and bosses. There is certainly a Time Trial mode and two alternative game modes (Avalanche and Humpty Dumpty), but these do not really renew the recipe, content to add sorts of modifiers to the experience.

While it will appeal to fans with its rich content, multiplayer and comprehensive level editor, this Rock of Ages 3: Make & Break will have a harder time convincing newcomers. The concept has not changed, however, as we still control here a large stone ball that you will have to steer through levels filled with traps while sharpening your defenses to protect your own fortress from the rock of your opponent. The mix of tower defense and gameplay is always fun and the quirky universe very appealing, but Rock of Ages no longer really manages to surprise and above all, the developers still have not corrected its small flaws. With its not very intuitive interface and its somewhat clumsy handling, the title will have difficulty convincing beginners in the first part. At 29.99 €, Rock of Ages 3 is no longer a “little independent game” that we try without asking too many questions… And this is ultimately where the bottom hurts because Rock of Ages was typically the nice little game and totally atypical that we released between two games of FIFA and Call of. That being said, if you loved the previous episodes, go for it. The content is there and the spirit is intact. 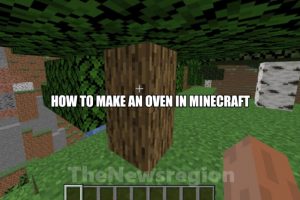 Games • How to • Minecraft

🔥How to make an oven in Minecraft 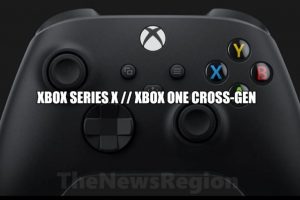 Xbox Series X: Microsoft Has Not Forced Xbox One Cross-Gen On Its Developers

One-Punch Man: Road to Hero 2.0 is now available on Android and iOS

Inception is 10 years old! Did you know that Christopher Nolan wanted to create a video game around the film?
Comment