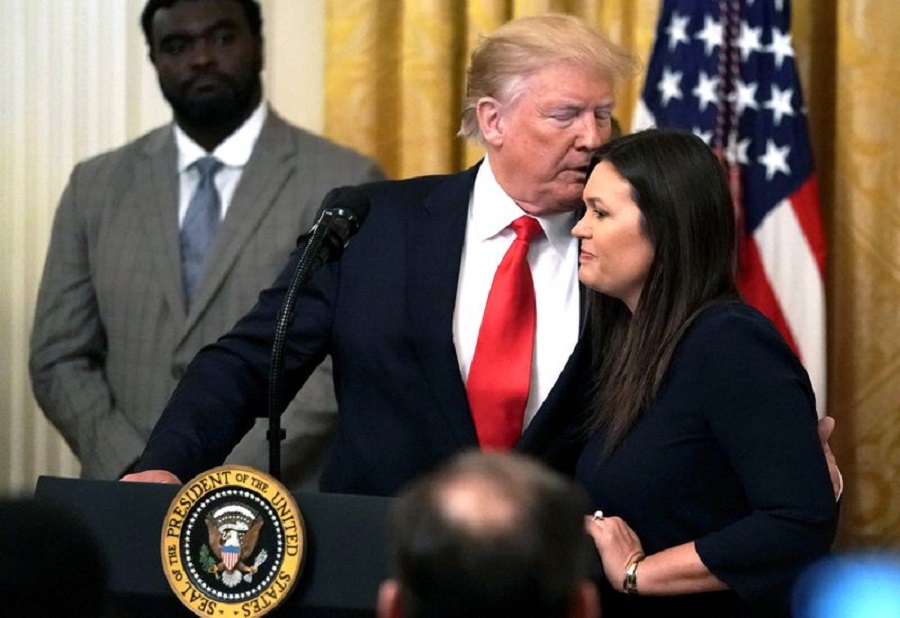 On Thursday President Donald Trump revealed on Twitter that the most talent press secretary Sarah Sanders is going to leave her position at the end of the month.

Trump twitted, “After 3 1/2 years, our wonderful Sarah Huckabee Sanders will be leaving the White House at the end of the month and going home to the Great State of Arkansas”. Trump also praised her and said that Sarah is a very talented person who did a pretty great job for White House. President was really thankful for Sarah for giving her valuable time, her loyalty to him.

The president didn’t reveal the name of the successor of his press secretary yet and Sanders said to the reporters that she didn’t converse the president about the potential successors.

Sanders addressed her job as an “Honor” and “Opportunity of the lifetime” when she was speaking at a White House event last year. At that time Sanders also gave emphasis that she will carry on her job as the most outspoken and loyal supporter of the president.

Thursday afternoon Sarah Sanders collected all the members of her staff and revealed her departure by the end of the month. There is a solid reason behind her decision and that is her family. She is moving back to Arkansas for giving her time to her family. Sanders has a beautiful family, she and her husband have three young children and being understanding the need of kids she and her husband concluded that it is the high time to move back to the family to settle them in Arkansas.

To support her decision Sarah Sanders last tweeted, “blessed and forever grateful to @realDonaldTrump for the opportunity to serve and proud of everything he’s accomplished. I love the President and my job. The most important job I’ll ever have is being a mom to my kids and it’s time for us to go home. Thank you, Mr. President!”

Sanders has joined the job of White House Press Secretary in July 2017 after the resignation of Sean Spicer. Not only press secretary but also Sanders was the most trustworthy and closest advisor of the President. She was with Donald during all his every single foreign trip.

Not only President her colleagues also praised her and Shah, but the formal deputy press secretary also said, “She did an incredible job defending the president with an often hostile press corps. And everybody who worked with her found her to be incredibly humble and she was an incredible friend, and mentor to me. She was the best boss I ever had,”