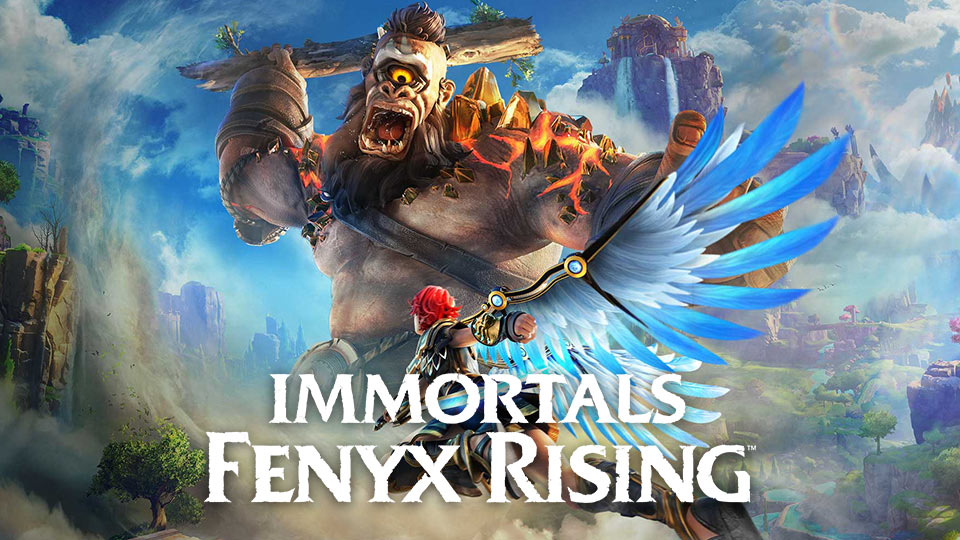 Discovered at E3 2019 during the Ubisoft conference, Immortals Fenyx Rising had a different name: Gods & Monsters. I was there when this new game from Ubisoft Quebec was presented at the very end of the conference. Back then, I immediately noticed a lot of similarity to Nintendo’s flagship game that blew up Nintendo Switch sales numbers. I’m obviously talking about Zelda Breath Of The Wild! A year and a half later, here it is ready to land on all possible and imaginable platforms.

A question nevertheless remains since the time when I was able to see it more closely and play more than 30 hours: Plagiarism or very great inspiration? Either way, I hope you’re hungry! Because there will be some little monster bones to eat and some ambrosia mezze. Because here is my opinion on the Immortals Fenyx Rising test! 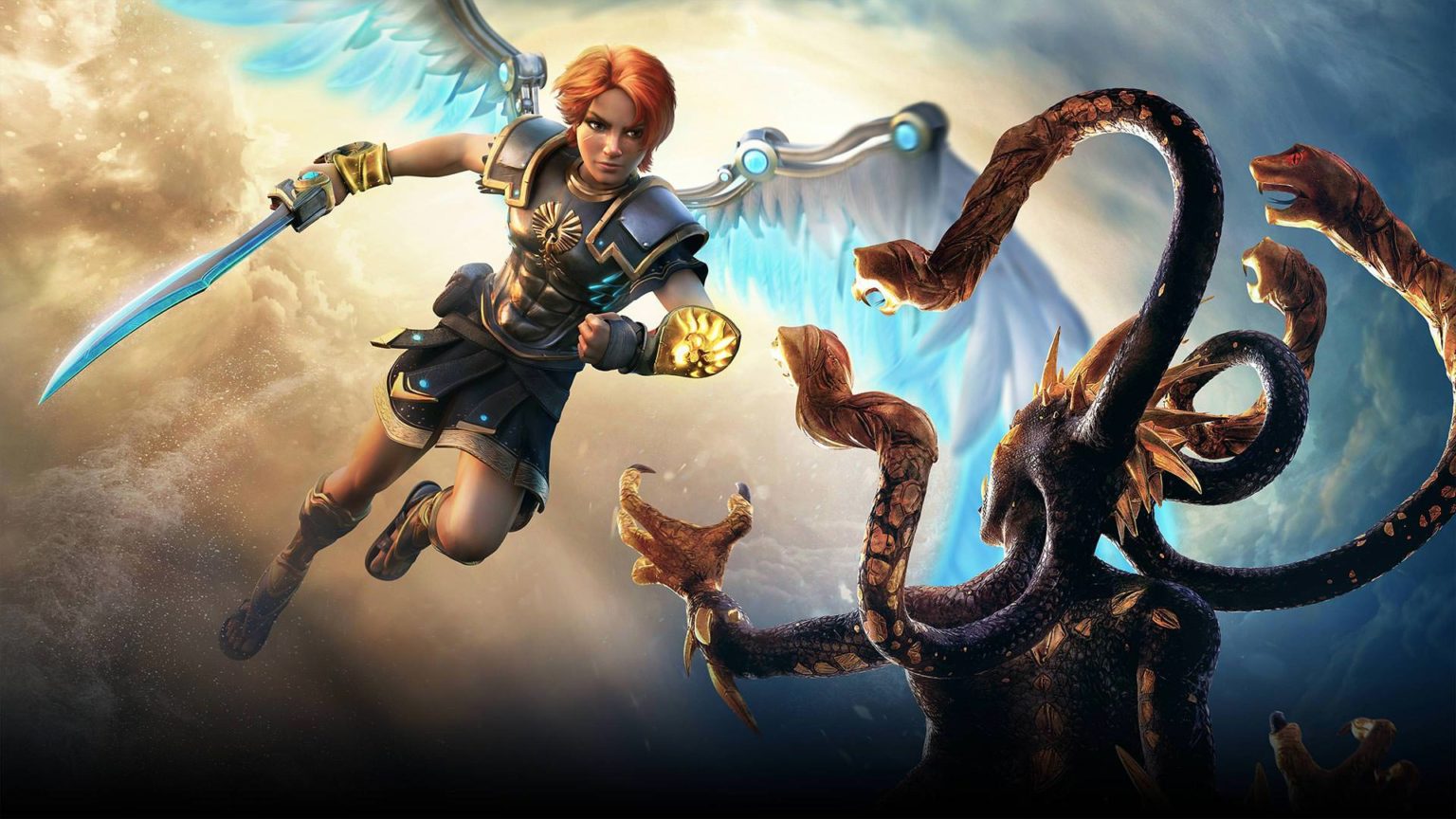 The ascent of Fenyx!

Immortals Fenyx Rising immerses us in the heart of ancient Greece. A meteorite freed Typhon, a demon wishing to purify the world by eradicating the living world while punishing the gods who locked him for millennia in Tartar.

The gods, too vain and too confident of their power will be killed or bewitched. A handful of them will prefer the escape in order to better prepare for a rematch.

Seeing the imminent apocalypse, they sent the heroes to clean up history. Unfortunately, these were easily corrupted and ended up becoming specters in Typhoon’s service.

Distraught, Zeus having no other choice left to find his brother Prometheus. He had been chained to the top of a snow-capped mountain.

Against all odds, Prometheus promised to help him if and only if Fenyx could not complete this task! Who is Fenyx? It is the hero of this story that Prometheus tells Zeus! The only living being capable of thwarting Typhon’s plans.

The story is all set, it’s up to you to decide its course! 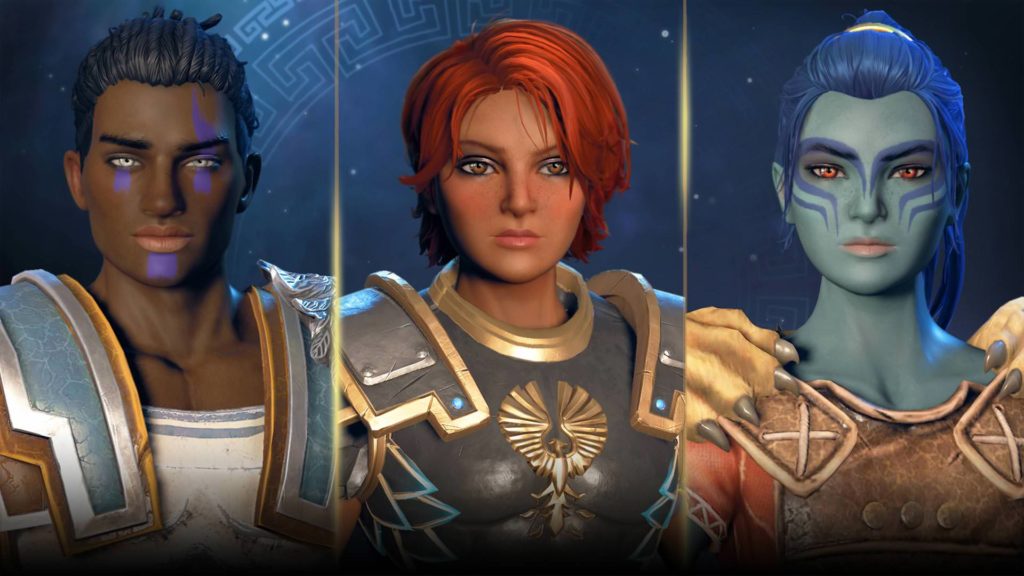 Despite well-balanced second degree humor, The VF is feeble …

If the story of Immortals Fenyx Rising holds up and manages to give us a few smiles, it is mainly thanks to the scriptwriting of Ubisoft Quebec.

Despite the interpretation of the French voice of Zeus by Lionnel Astier, the French version will not really support this humor and will fall a bit like a failed blank …

It’s a shame not to have exploited the delirium to the end! 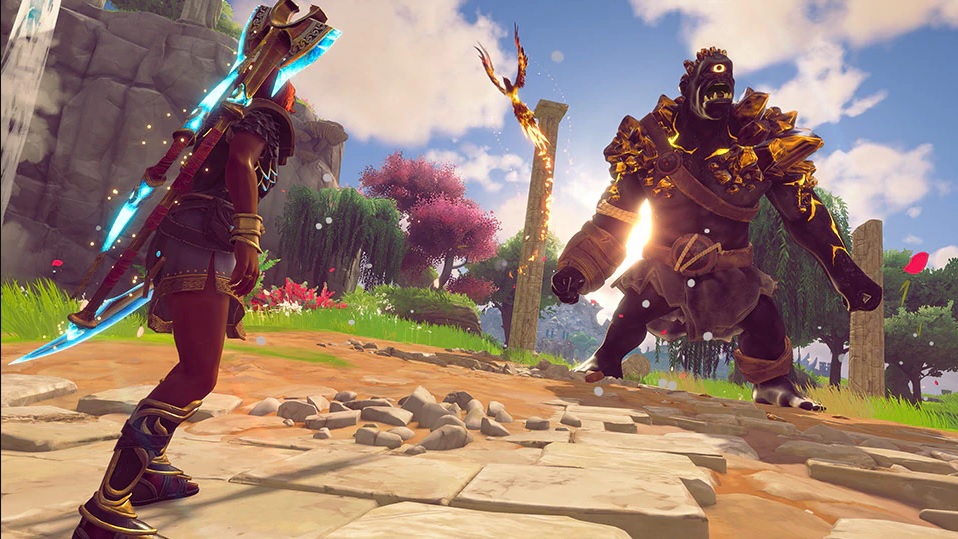 Ubisoft has successfully produced an Assassin’s Creed in Zelda-Like!

The real peculiarity of Immortals Fenyx Rising is of course its enormous resemblance to Zelda: Breath Of The Wild …

Even if Genshin Impact didn’t shy away from its genre either, we can only see that 70% of the game’s content and gameplay phases are taken directly from Nintendo’s license.

Looking at the game credits, I could see special thanks to Michel Ancel, but not to Eiji Aonuma or Shigeru Miyamoto. Zelda’s dads.

How about the end of the story? It will be up to Ubisoft or at least its developers to give us an answer one day or another.

Either way, while connoisseurs might see it as a pale copy of their favorite game, there’s no denying that the Fenyx Rising remains eye-catching and makes you want to spend the time!

It’s not an easy exercise to copy or draw inspiration from a genre that has reinvented itself.

And while we can sometimes see copied game elements without adding much, the sauce takes effect!

We will however note a special mention of the various labyrinths which stand out a little more from the other gameplay elements used in Nintendo’s game and which are a notch higher on the player’s thinking to overcome it. 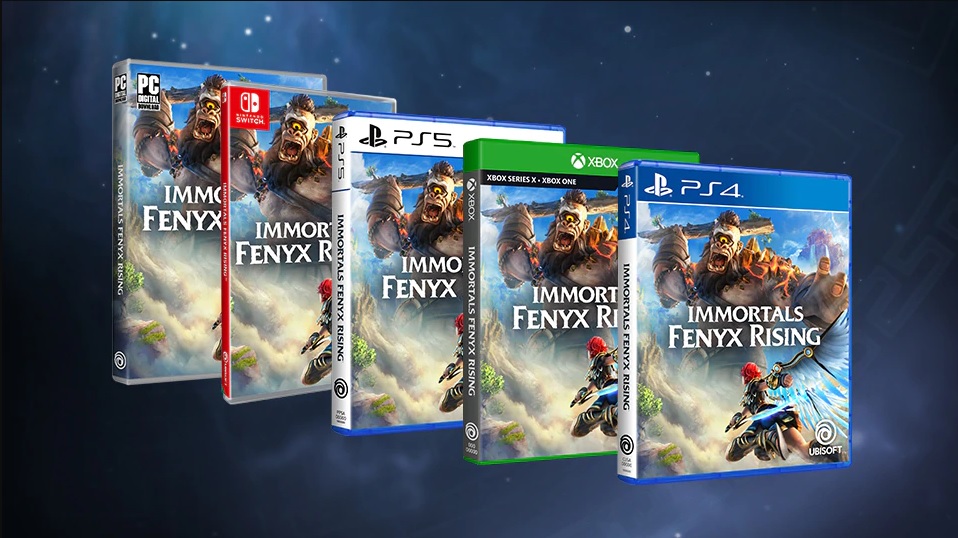 An assumed and successful artistic direction

On its visual aspect, Immortals Fenyx Rising is very colorful, its features are reminiscent of Pixar / Disney productions and everything is well used in combination with its quirky humor.

This kind of game could be suitable for adults as well as children, despite a PEGI 12+ recommendation.

And furthermore. Whether you’re on a current console or a next-gen console, you won’t have to have too different an experience.

Indeed, if the game can afford to make you choose the performance mode with 60 images per second and with dynamic resolutions or the cinematic mode with 30 images in 4K, the other versions will not be “less pretty”.

The Ubisoft Quebec team made the judicious choice to use the Alvin engine by optimizing the textures to be loaded using a very cartoonish artistic direction in order to camouflage these types of differences that could be visible from one console to the next other. 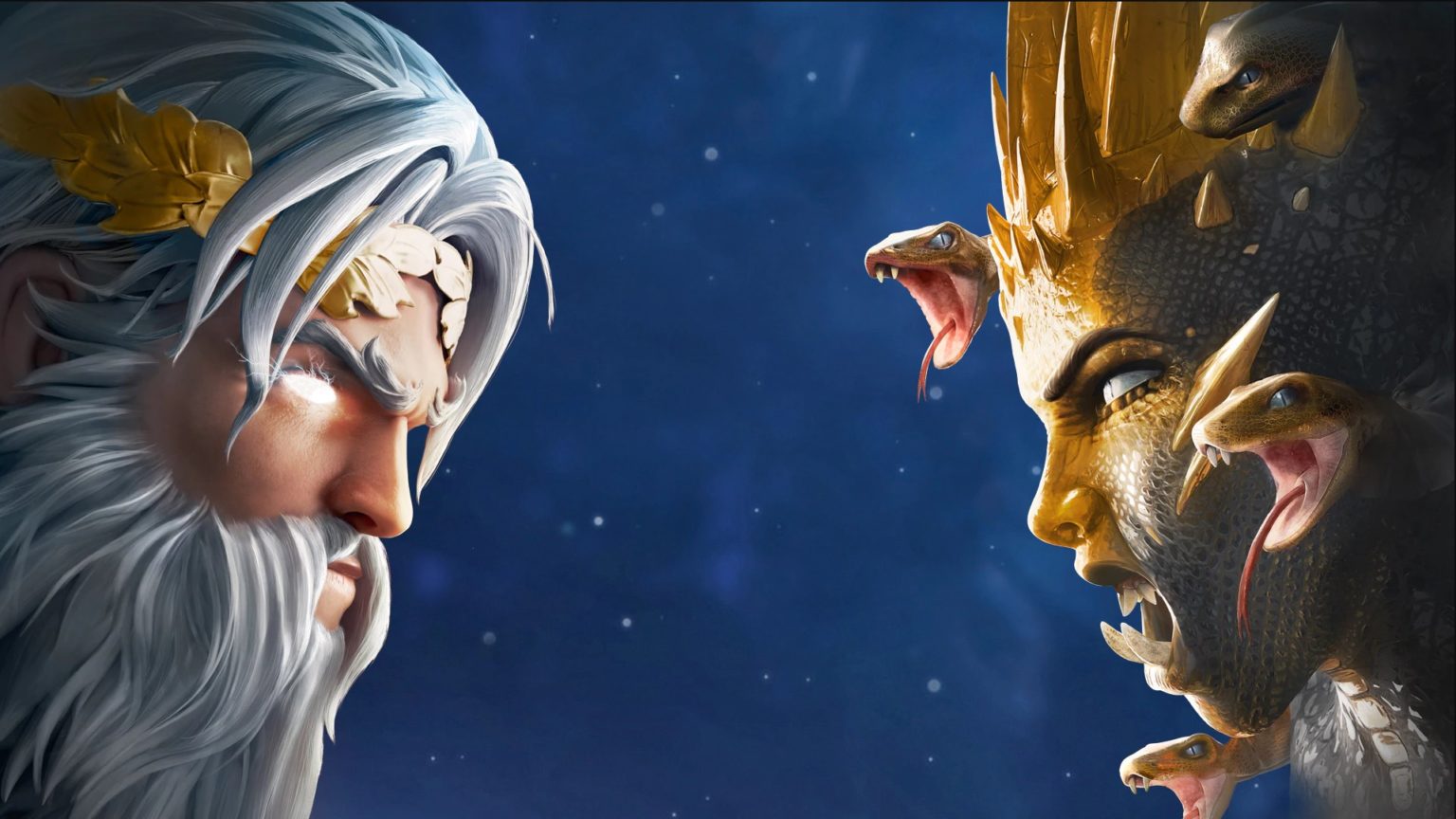 An Open World with a multitude of things to do! Ultra dynamic fights

Just like some Zelda, you will have to rely on the different gameplay elements that will appear to you in the form of a tutorial.

Immortals Fenyx Rising will give you a plethora of quests to complete and loots to obtain!

To defeat Typhon, you will need to free 4 gods who will give you 3 blessings each. Think of it as bonuses that allow you to be stronger and use passive skills!

Fenyx Rising makes great use of the combat phases of Assassin’s Creed Odyssey. What could be more normal, since Odyssey’s dads are behind this game!

Making the fights ultra-dynamic and having to appeal to your cunning and your strategic mind. It will be up to you to determine the best approach to overcome the various enemies that will stand in front of you. All of course from Greek mythology!

To complete the game 100%, count no less than 45 hours of play. If you are of the nature to want to get straight to the point, a good fifteen hours of play will allow you to reach the end of the adventure, without too much hassle … 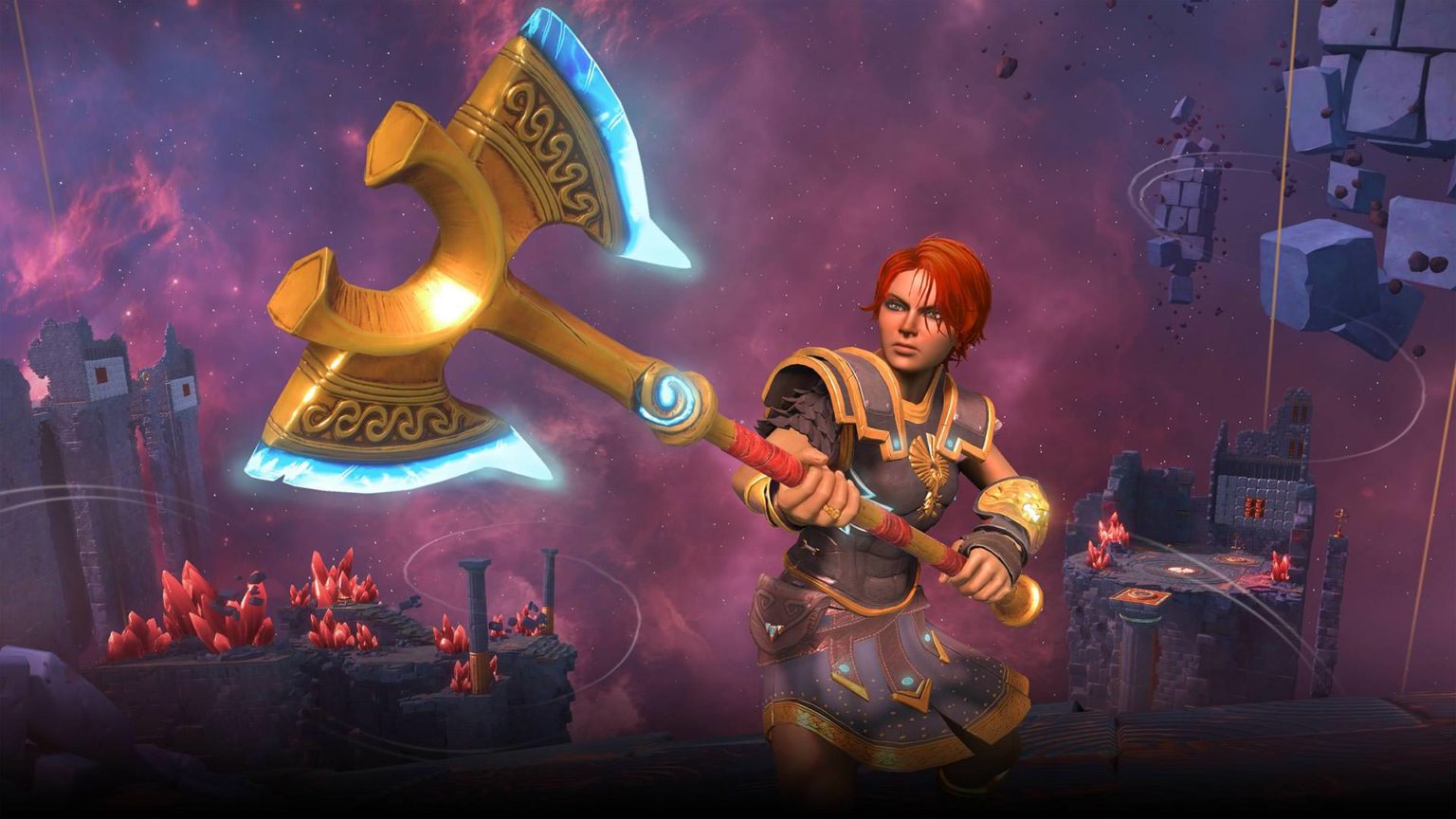 The music of Immortals Fenyx Rising is discreet, but not devoid of interest …

The Immortals Fenyx Rising soundtrack will not be remembered for sure!

We use vocalizations, very discreet and mystical sounds, which despite the fact that they fit perfectly into the game we are offered are not going to go into extravagance and prominence.

It’s a bit of a shame, since the drama, the extravagance, is very divine, very Greek mythology, in the end …

🔥Get Free Robux at our Free Robux Site
What are the video game releases for the month of July 2021?
Comment