With more than 1o0 million subscribers, the Internet is flooded with a lot of streaming services. If you have to decide on Netflix vs Hulu the which one you go for? It’s really tough to decide the best online streaming for you. Without any doubt, Netflix is on-the-top of all with new releases every weak. What makes Hulu withstand with Netflix? Though the two streaming services are the same, they are different in many ways. Scroll down to find a solution to your queries and know more about the same.

There are a lot of features that we keep in mind before choosing an online streaming service. The first and foremost one is price because it really matters how it will affect your pocket. The other features are speed, tv shows and movie collection, device support, Interface, etc. The days of being watching your favorite movie at a fixed time or buying those expensive CD’s has gone now. Now it the era of the Internet world, you can watch your favorite movies and shows on-demand.

If you compare the price of both the services and want to take a decision on this only then close your eyes and go for HULU. Why I am saying so, Let us see!

Hulu has dropped its prices in Feb 2019 and Netflix Prices have increased at the same time. 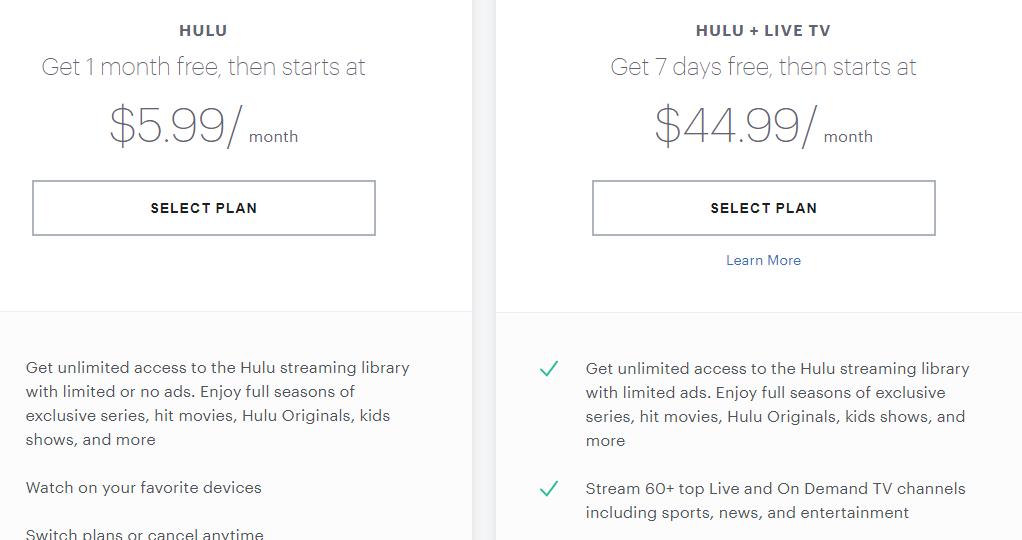 Netflix’s premium plan allows for four streams together to be viewed, where Hulu Doesn’t even stand out! Netflix’s Standard option is the most popular one to choose and comes under the budget. Moreover, if I talk about HULU then Hulu’s basic plan is much affordable and appealing.

The Content Library is one of the main factors to choose one from the best two. If prices are less and content is bad then there is no meaning to buy such a pack. But the picture isn’t like that. Both Netflix vs Hulu offers millions of content, but both have different characteristics. Netflix is famous for its original programmings (the original Netflix series and shows) like Stranger Things, Narcos, Unbreakable Kimmy Schmidt, Master of None, and many more. In the year 2018, Netflix spends a huge amount of money on its original content making. Though every show is not a hit, different genres are none less than a good pick!

In comparison, if we talk about HULU, then This streaming service is co-owned by large networks and studios including Comcast and Disney, giving it access to many popular TV shows. Hulu has a collection of old to new hit TV series like the Simpsons, Seinfeld, ER, Futurama, Heartland, Crown series, GOT and many others.  The great thing is that it releases new episodes of some of the most popular shows around a day or so after they are aired on TV.

Netflix is better for originals while Hulu offers more when it comes to network TV programming. You got a large selection of movies with both services from different genres, so there should be something in there for everyone.

Netflix vs Hulu: Shows and Subscribers

Though the number of shows the services offer isn’t revealed officially according to some researches done in the past years, I am sharing some data with you. Netflix offers 1,569 TV shows and 4,010 movies. Netflix isn’t saying a single word to the number of shows or episodes it has in its library. Hulu says that it has 85000 TV episodes to watch on. an older report says, Hulu had 2,900 TV series and over 2,500 films.

If I talk about the number of subscribers then Netflix wins here without any competition. Netflix has a total of 155 million users worldwide and 148 million paid out of them. Whereas Hulu is still gaining popularity and has around 30 million subscribers now!

Both the Services allow a large device support feature. The List of Netflix supported devices is pretty less than Hulu. Hulu supports a large number of devices. Below given images will show you a clear picture.

Netflix vs Hulu has a comparison chart discussed above. After going through the article you can simply find a way to your problem of choosing the best one for you. Both are best at their own place. Both have some pros and cons need to be analyzed before making a decision.

This is my defense of native Apple apps

The Last of Us 2: an attractive new grip before the release