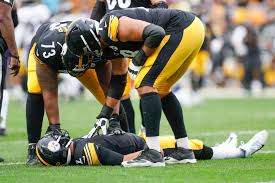 Mason Rudolph, backup quarterback of Pittsburgh Steelers left the game yesterday when suddenly got concussion and quite went down by the Baltimore Ravens.

The backup quarterback broke the pocket and arrived left as he looked downfield to make a pitch with 7:39 to play in the third quarter. After throwing a pass to receiver James Washington, Rudolph was hit from behind by Ravens linebacker Matt Judon. Fortunately, Earl Thomas came from the front to lard the quarterback while hitting the side of Rudolph‘s cheek area with his helmet.

Rudolph right away went down and his body seem to go limp because his helmet banged into the turf. Rudolph lay on the ground immobile whereas teammates rapidly called for Pittsburgh’s medical staff to come and look after Rudolph.

Just few minutes later, Rudolph ultimately appeared to recover and sat up. He walked off the field little by little, with support from teammates and medical staff.

Rudolph had to be ruled out due to being diagnosed with a concussion for the remainder of the game. He was taken to the hospital.

After the game, Thomas said:

“I hit the strike zone like we talk about. I didn’t go high. I didn’t intentionally try to hurt him. I’m worried about him. I heard he’s at the hospital. My prayers go out to him and his family. I’ve never tried to hurt anybody.”

Rookie Devlin Hodges entered the match in Rudolph‘s place. He completed seven of the nine passes in 68 yards and ran twice in 20 yards, but the Steelers fell to Raven 26-23 during overtime.

Rudolph took over as Pittsburgh midfielder after Ben Roethlisberger suffered a late-season elbow injury in his right arm in the team’s second game. He completed 13 of the 20 passes in a 131-yard pass and a touch of the ball before existing.