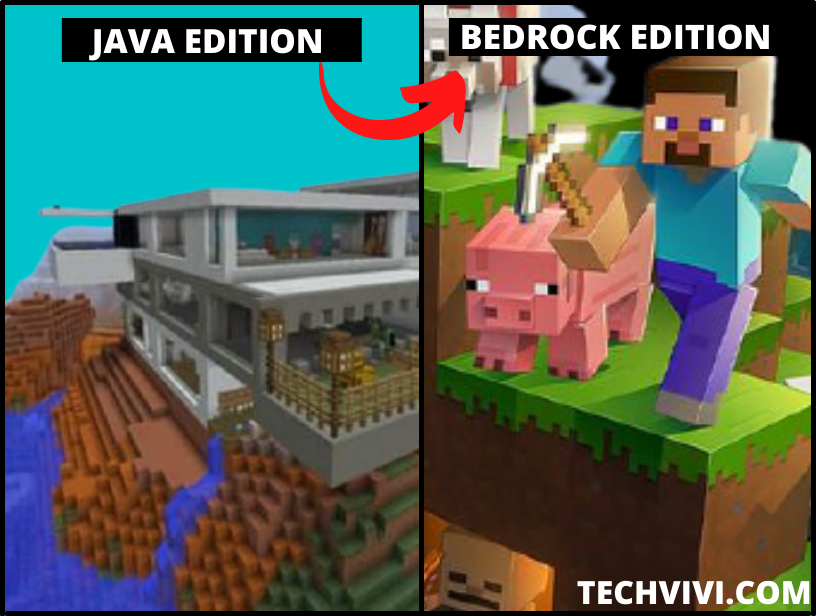 Minecraft is the most played game in the gaming world, developed by a Swedish game development company. The game is available in two versions Minecraft Java Edition and Minecraft Bedrock Edition. The best thing about this game is that it is available on all devices. But the game differs on all the devices.

Debug stick is for changing how a block appears or behaves. Players in Java Edition can get it using the given command. For this, we need to turn on the cheats. Cheats are turned on by hitting the block while holding the debug stick in hand.

This feature allows players to hold items in their left hand. In Java, edition Players can have many things off-hand but in Bedrock Edition players can only hold only five items which include a shield, totem of undying, arrow, map, and firework rocket.

In Java Edition players have the option of applying a banner pattern to their shield. This makes the shield look a lot cooler. By placing a shield and a banner in the crafting grid players can create it. Patterns might appear slightly different on the shield.

When in the game spectral arrow hits an entity, its outlines start glowing. This is visible through h solid blocks. It is crafted with the help of glowstone dust and one arrow. It has a golden tip and can be very helpful when fighting against mobs on uneven terrain.

Foxes are not available in the Bedrock Edition of Minecraft. Bedrock players can find them only in 1.13, 1.16.220, and 1.17.0.50 beta versions. They spawn in the taiga, snowy taiga, and giant tree taiga biome. They are bred with the help of players using sweet berries or glow berries.

Players often complain about mob spawning. It is all scattered and messed up in Bedrock Edition. In Bedrock edition players may not encounter any hostile mobs while exploring cave buttons of monsters that would have spawned in one corner of the cave.

Mob farms can be pretty daunting and annoying in Minecraft Bedrock whereas, in Java Edition, mob spawning is much organized and perfect.

The main problem with the Minecraft bedrock edition is that Minecraft Bedrock Edition lacks many technical features that are available in the Java Edition. The debug screen is one of the many features that must be present in the Bedrock version as well.

Hardcore mode is a Java-exclusive world mode like survival. When creating a new world players have to select hardcore mode. One interesting fact here is that Hardcore mode is the highest level of difficulty available in vanilla Minecraft.

Only one life is available to the players in this mode. If the player dies once they will not be able to respawn back in the world. Additionally, Veteran Bedrock players would love to take up this challenge if Mojang adds it to the other version.

In the Bedrock edition number of problems are present, Pistons move slower, fast tick contraptions are difficult to build, common circuits are complex. On the other hand, Redstone in Java Edition is much much better. Many Bedrock players want the same Redstone as Java Edition.

Like hardcore mode, spectator mode is another interesting game mode available in Java Edition. While in spectator mode, players become invisible to non-spectator players, can pass through blocks, and look at mobs’ points of view.

Though Bedrock players can also use external mods to become spectators. But it is buggy. In the words of the former community manager of Minecraft HelenAngel, spectator mode will get inculcated in the future in the bedrock edition.

Bedrock Versions: Bedrock is the current non-Java Edition of the game.

There are lo more differences between the two versions, but these are the major ones to help pick which edition is right for you.

Windows 11 features are here to go with new updates!

Benefits of BlockChain – Let’s know them