With virtual reality, you can walk around in every area as if you are physically there. The sensory experience feels so live that we disremember we are in the artificial Environment. Feeling the real cosmos by the astronauts during their preparation is an excellent example of virtual reality. Putting on VR headsets and entering into a new world is all virtual Reality like in 7D movies. You might experience like you are on a roller coaster ride and in a ghost house.

There are lots of VR games in the market but which ones are the best, here we are going to explain the list of best and most trending VR games you would love to play this year. You can play these VR games on Android, PC and PS4. Apart from revealing the features of the games, we have also given the rating and review of each game to let you know about the best one.

A rec room is free to play a virtual Reality video game developed and published by “Against Gravity”. It was first released for Microsoft Windows in 2016, then forPS4 in 2017 and now for Android phones too in May 2019. So, What you are waiting for now? You don’t have to sit with ps4 to play Rec Room, you can ply and enjoy anywhere on your device. The game can be played with or without Virtual Reality Headsets but without Headsets, all the options are not available. It is the best free entertaining game to chill out with friends. A rec room is both a single player and multiplayer games.

Powerful tools are available in the game to manage your experience.
Customize your appearance with a different outfit.
3D and game designing tools that you build and share your own custom rooms
Share photos and manage your account on rec.net Rec Room is updated frequently to add more fun stuff to do, so check back often!
The Reviews of the game are very positive. 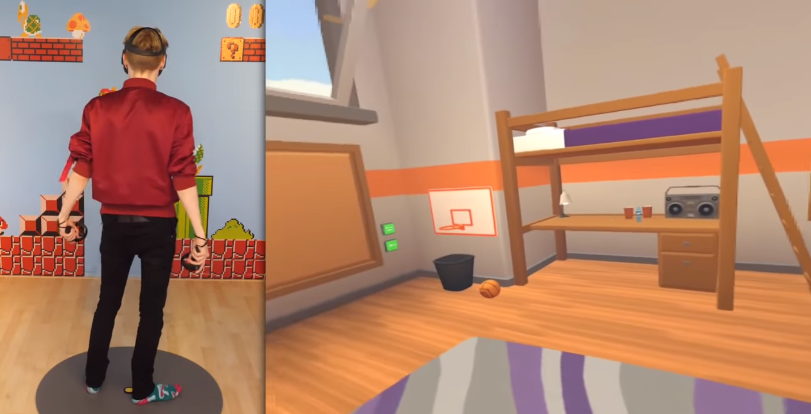 It is free to play a Virtual Reality game designed exclusively for Android phones. The game is published by Mikael W Bergene. If you are running. jumping or shooting player then this game is not for you as this game is solely based on Teleporting. It is very easy to play requires only pressing a single button. The game has imaginative riddles and there are no flaws in the game. You will need to move around At 360 degrees to play the game. The game can be downloaded from play store for android users.

The ratings and Reviews of the game are very good.

A post-apocalyptic environment full of blood-thirsty zombies is waiting for you. The game is recently updated in January 2019. The main gameplay is to kill the Zombies by shooting them. You have to go through the dark channel full of bloodthirsty zombies and dreadful monsters. Kill them with the help of several armaments and survive in the world of dreadful zombies. Zombies hide in the tunnels away from the daylight. Take any weapon to attack. Open the door leading to the monsters then. Move forward, get through the obstacles and abandoned carriages, shoot at zombies as soon as you see them. Don’t let the monsters approach you.

The game has good graphics and Various armaments. It would be fun to play the game. The game requires VR Glasses.

The Reviews are positive and rating is 3/5

It is a room scale virtual reality video game. The game is exclusively made to run on Microsoft Windows in 2016 developed and published by  Valve Corporation. What does the game say? Set in a pocket universe of Aperture Science, The Lab offers a wide range of ways to enjoy Virtual Reality. There are different mini-games available in the Lab.

The reviews are the game are overwhelmingly positive.

A rhythm game! Beat Saber is a virtual reality rhythm game you have never seen Before, developed and published by Beat Games, released in May 2018.

Your goal is to slash the beats, which perfectly fit into precisely handcrafted music, as they fly towards you.

Reviews of the games are very positive.

So these are some Virtual Reality games you must play this year. The list is endless for the players but these are a must play! I hope the article would be helpful for you.

How to be a good player on Roblox?
Forza Horizon 4 download full version for PC: Step by step guide to install the game
Comment